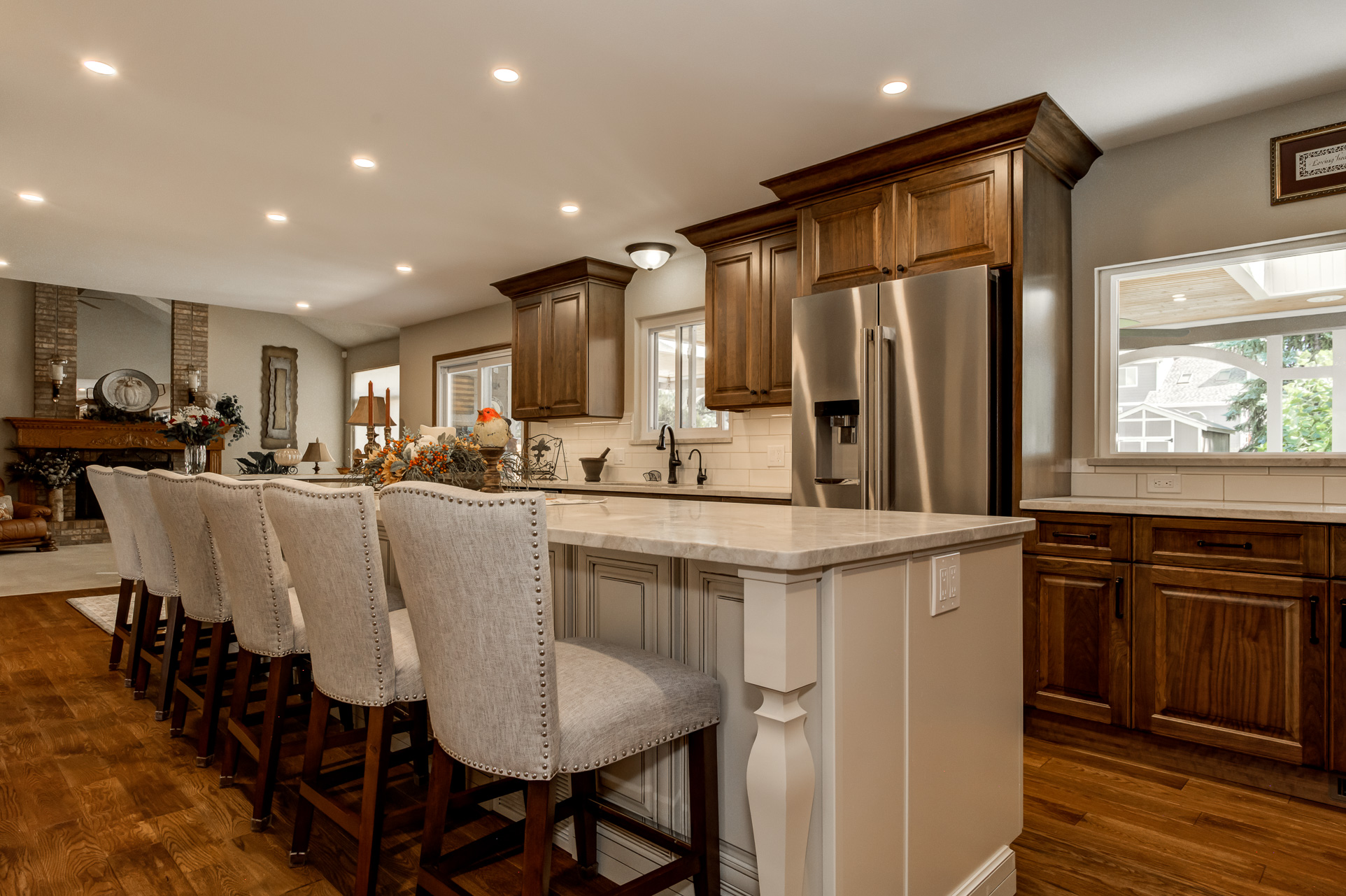 Whether to remodel or move is a question many homeowners face at some point during homeownership. In this case, our clients opted to stay, and give their kitchen a major facelift.

The primary goal of the remodel was to create a larger more functional kitchen, add more seating for large family gatherings, increase storage, and introduce an elegant mix of materials that would make the kitchen stunning in appearance.

Stewart Remodel Design Build's Interior Designer Deanna Bixler created a floorplan that used the space behind the kitchen, which was really a "second" dining room, to provide the additional space needed for the expanded kitchen. This also provided a more open floorplan. Since the wall separating the kitchen and "second" dining room was non-load bearing, the layout change was feasible, less intrusive, and less costly than it could have been.

To improve the layout and functionality, all the appliances were relocated. The range was replaced by a double oven and a cooktop, with the exhaust hood vented to the outside.

Flooring usually comes into play, especially if a wall is removed. In this case, Paradise Valley oak flooring was installed throughout. Electrical changes were rather substantial, which isn't unusual with recent code changes. Recessed lights, undercabinet lights, and new circuits were added.

A television was added above the refrigerator, it's installed inside a cabinet on a retractable arm so it can be hidden when not in use.

The result of these changes was the creation of an incredible kitchen, beautiful, useful, elegant, a space that will be enjoyed for many years to come.

Stewart Remodel Design Build, an accredited BBB company with an A+ rating since 2007, has been remodeling interior and exterior spaces since 1999. Our turnkey approach is created for clients wanting one professional company to handle every aspect of the remodeling process. Clients work directly with degreed and certified interior designers who are on staff, producing superior results. Most product selections take place in our design center, which has multiple product displays. We maintain local and national accounts with various partners, including cabinetry, tile, plumbing fixtures, BBQ grills, and more. Our design process also prepares our staff for the job ahead, a critical component.

Stewart Remodel Design Build will be pursuing new home construction in 2023, including a development called The Raven in Woodland Park.